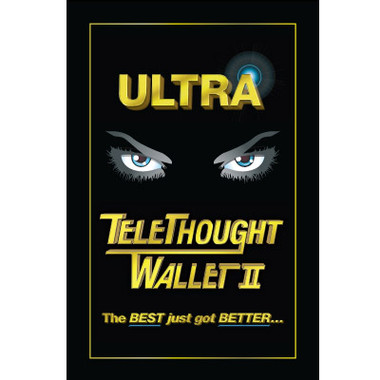 Telethought Wallet is one of the most diabolical utility devices in magic...AND IT JUST GOT BETTER!!

Chris Kenworthey and Tony Curtis are providing the magic world withPURE PLATINUM, here. This effect literally goes Beyond Expectations and Beyond Explanations. Three words describe this trick "Extra Sensory Perfection" and Telethought Wallet II truly borders on being the definitive answer to the mentalist's Holy Grail.

A spectator is invited to think of ANY word, symbol, picture, number, etc. He/she writes it on a card. It is inserted into a sleek black wallet face down. Now without any moves, electronics, impression devices, flaps, etc., the performer gleans every one of the spectator's thoughts every time... guaranteed! Remember, without ANY moves at all, one hundred percent of the spectator's information is delivered secretly, ingeniously, and imperceptibly to the performer. With Telethought Wallet II the gimmick is now completely indetectable, incredibly designed and now inside the wallet! Truly the Best has gotten Better! (Don't be left standing on the wrong side of the velvet ropes)!

As they say "the sky is the limit," here. Virtually any "mind-reading effect" can be performed with the Telethought Wallet II. Design duplication, book tests, telepath experiments can now be presented under immaculate test conditions. Imagine using the Telethought Wallet II for preshow work! Or combining it with a Brainwave Deck, Invisible Pack orPrecognition Deck. There is at least one other wallet currently on the magic market, which could vastly enhance its potential and ingenuity if it employed the same material presently utilized in the Telethought Wallet II. Something to think about.

Great for all skill levels - from Beginner to Professional!