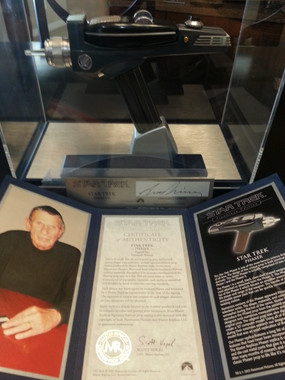 The STAR TREK™ Phaser is one of the most famous science fiction props of all time. The design of this unique prop is both practical and visually dramatic. The classic Phaser is actually comprised of two weapons; the Type 1 Phaser (P1) and the Type 2 Phaser (P2).

The P1 is a small, black, clamshell shaped weapon that can be used attached or detached from the P2. The P1 fits into the top of the P2, which houses an amplifier assembly that increases the power and range of the weapon. The handle of the P2 is a removable power pack that can be quickly removed with a simple twisting motion.

Numerous versions of the Phaser appeared throughout the original television series. The shape, materials, and colors of the Phaser varied somewhat during the run of the series. Master Replicas has chosen to reproduce the Phaser prop from the second season of the series. Our designers took numerous measurements and reference photos of an original prop. The original prop was also digitally scanned in order to create a 3D computer model. Using all of the information gathered during their extensive research our designers created an engineering model that was an exact replication of the original prop.

Our Phaser replica features a long list of mechanical and electronic features that have never been incorporated into one replica before. The Master Replicas Phaser replica is constructed of durable machined and die-cast metal parts that give it a substantial weight and solid feel. After many months of research and development, we have brought the classic Phaser prop to life like it’s never been offered before.

The power level dial has ten settings: off, low stun, medium stun, uv torch, phaser low, heavy stun, phaser medium, phaser heat, phaser high, and overload. There appear to be green, red, and violet leds in the emitter and they flash and strobe differently for each setting (except off) when the firing button is pressed. The side dial clicks around, but has no function.