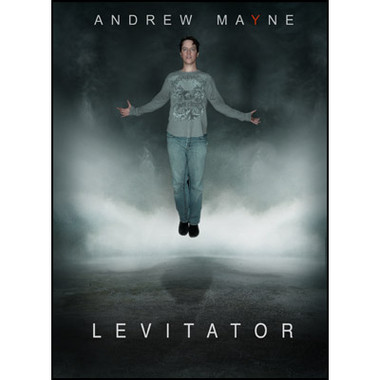 Andrew Mayne, creator of Illusion EFX and Gut Buster, presents a new DVD dedicated to the art of levitation.

Including five levitations for the stage and street; Andrew teaches practical methods for defying gravity that will leave your audiences spellbound. The levitations featured on the DVD include:
Levitator by Andrew Mayne - DVD

Levitator - Stand on a chair and float several feet off the floor, to the side and then glide gently to the ground.

UP - A baffling effect where you float up to a chair and back down making the audience wonder if you levitated or slowed down time. Makes a great emcee bit.

Flight - Put on a cape and float in the air like a superhero.

The Anti-Gravity Machine - An impromptu effect using a sheet of newspaper you can perform at a party to convince your friends you know an arcane science secret that allows you to defy gravity.

Ultimate Levitation - An easy to build stage illusion that allows you to openly levitate without any cover.
B In this DVD Andrew shows his favorite methods for levitating in a variety of situations from the street to the stage and everywhere in between.