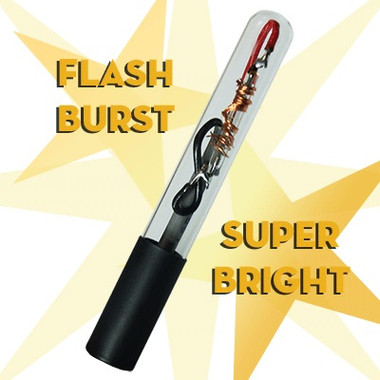 Flash Burst IS: A body-worn flash effect that causes a bright flash of light to pop from the center of your chest. Its handy for making things vanish or appear in a flash of light.

Many Moons ago, John Cornelius created the Fism Flash, a body worn flash effect that was popular with many professional close-up and stand-up workers including our own Steve Johnson.

The Fism Flash was an enormously clever idea but was not without its limitations. It had a click-your-heels trigger and no interrupt switch to prevent you from accidentally flashing as you walked around the room. Mr. Cornelius would later develop the Fism Flash II which was fired from a mercury switch. Later, he would discontinue the Fism Flash product entirely.

Desiring to fill a hole in the retail market, the Raldon MFG. Co. researched the parts of the original Fism Flash and redesigned it from the ground up. They consulted with Steve Johnson as to its size, shape, brightness, refresh rate, comfort and even its color. With the guts, bulb, trigger and body all redesigned, Raldon released the product as Flash Burst, a body flash for the modern professional performer.