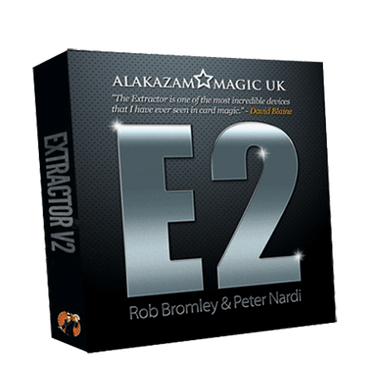 Q. What Is A Gold Edition Product?

A. Alakazams Gold Edition is the latest up date on a previously released effect. This new edition contains the latest gimmick design and usually new handling tips and extra bonus routines!
The Extractor is the latest brainchild of mad genius Rob Bromley. Refined and streamlined over the last year  Peter Nardi, this fabulous utility item is now ready to be unleashed to the magic community.

Up until the 2008 Blackpool Convention only five people had ever seen the final Extractor gimmick. Then, at that convention, Peter demonstrated the power of The Extractor by performing his signature effect - "Impossible Card to Pocket." This incredible trick was the talk of the convention and the exciting news is that Peter's trick is just the tip of the iceberg...

The Extractor is a true utility item for the astute magician and each unit is painstakingly hand-made by Rob and is a piece of master-craftsmanship. The card effects possible with The Extractor are only limited by your own imagination.

Your Extractor comes complete with an in-depth companion DVD full of tips and effects by Peter Nardi, Mark Elsdon, Gary Jones, Chris Harding and Chris Congreave. The effects include Peter's signature effect mentioned earlier, Mark's show-stopper version of 'Harry In Your Pocket', an unbelievable red and blue deck transposition/prediction guaranteed to melt your audiences' brains, plus fantastic handlings of card to wallet, card to spectator's pocket, card to shoe, in fact, card to almost anywhere!
In addition to the routines previously on the Extractor DVD the Gold Edition also has the following bonus footage
How to Re-box your Extractor with your own chosen brand of Playing Cards (poker size)
How to ensure your Extractor is in top condition at all times
New routine ideas Including Peter Nardis Intact routine.  The much talked about Sign card in sealed deck!!

So don't miss out on your chance to own one of the effects of the year and one that has baffled some of the top magicians in the world.

All prices are in USD. Copyright 2023 BLACKMAGICILLUSIONS. Sitemap | Shopping Cart Software by BigCommerce