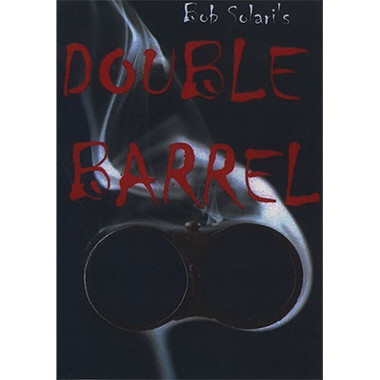 You have never seen anything like this! From the strange, yet clever mind of Bob Solari comes Double Barrel. When they said, "Give it to them with both barrels", Bob took it quite literally!

EFFECT:
Show two decks of cards, a blue deck and a red deck. Ask a spectator to select one of the decks and put the other deck in his/her pocket for later. Remove the second deck of cards from its case, shuffle the cards and spread them face up.... normal deck... totally mixed up. Turn the cards over and spread them face down. Ask the spectator to simply touch the back of any card. There is NO FORCE of any kind. It's an absolutely FREE CHOICE! The face of the card is shown to the audience. The back of the card is towards you at all times. The cards are NOT MARKED in any way! The selected card is returned to the deck and the deck is returned to the box. Ask the spectator to concentrate on his/her card.
In a flash, you are able to CORRECTLY NAME his/her card! In addtion, you name a number. Let's say the number is 23. Ask the spectator to remove the first deck from her pocket and count down to the 23rd card. Amazingly it is the SAME CARD as the one she freely selected just moments earlier! DOUBLE BARREL is a killer! The gimmick will absolutely blow you away!

Each one is hand made by me! Remember: NO forces, NO memory work, NO marked cards! Resets in one second! Immediately repeatable!

"A book can be written on the gimmick used in Bob Solari's Double Barrel." - Randy Wakeman